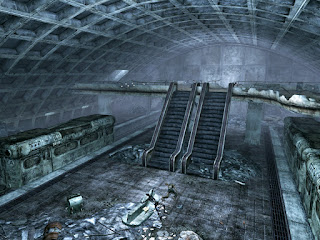 I’d been to Washington D.C. precisely twice before the Women’s March; once as a high school student with my parents, and once in Fallout 3. The former was a blurred weekend of Smithsonian halls and lines to see the Declaration of Independence; the latter was much more immersive. I don’t have the hour count on hand but like so many other players, Bethesda taught me survive in another world using their uniquely American-style role-playing mechanics: Shoot and Loot.
Fallout 3 wants us to think about America, about what it means to be American and where those values might drift should America cease to exist. Here’s the rub: the Capitol Wasteland functions not only as a nightmare but as an American dream. When the player emerges from the vault in the beginning of the game as the Lone Wanderer the game offers a promise. A player can take what they want and be who they want to be as long as they work for it. From the perspective of the player, the ideal of America never stopped existing after the bomb dropped.
I’m not the first one to comment that for all the Fallout franchise wishes to imagine new and desolate future, it seems fixated on a terribly outdated past. Late-capitalism, sexism, and racism are living fossils the game animates with only a patina of satire. Still, somehow, beneath all the manufactured nostalgia, Fallout 3 gave me a sense of place and of belonging to my nation’s capital. All those high school weekends spent playing in my basement gave me what I can only describe as a digital foundation to resist.
We left at 8 AM. At every intersection we passed, people emerged. People adamantly declaring the symbols of the march. People smiling at each other. People knowing together. I have never experienced such a phenomena. 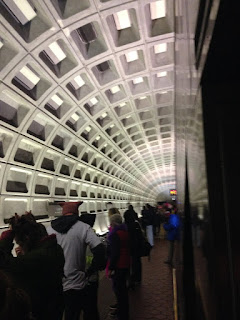 When we entered the metro, I looked up to those familiar coffered ceilings. The brutalist station layout overflowed with purples, pinks, and handmade signs. Though I’d never been to a protest before last weekend, I knew these subways intimately from my time exploring in D.C. Ultimately, we left the subway and walked into D.C. through Georgetown because the trains were so full. It was a gray morning with a certain gloom no unlike the swampy clouds that hover over the game space. The lived experience mapped neatly to the textures and bitmaps that had been tucked deep into my memory. It was as if I was loading up an old saved file. 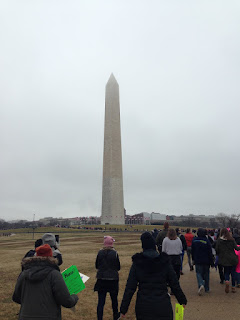 Before us, the obelisk rose – rendered not by processors but by masonry. In great ellipses we followed the path around its base as my memory twitched again. I had been here before, but only by myself. In Fallout 3 the National Mall is a war torn landscape echoing with gunfire. The player is always alone, surrounded by threats. But on January 21st 2017, only the skeleton of the inauguration remained as a new force surged across the dormant green.
I was back. I was not alone and I did not need a gun, only cardboard signs, hats, and water. The surge of forward momentum was not unlike marching with Liberty Prime against the Enclave, except this time there was no need for an unstoppable robot. We were already unstoppable.

When we talk about power fantasies, we speak dismissively of games, of their immaturity, of their false ideology and toxic masculinity. But power is important. People need power and to be reminded of their power. Fallout 3 was the salve to a wound I never expected to have when I unwrapped the game on the Christmas day before Obama’s inauguration. Now, though, I am thankful to have played that role. To have gone through the motions practicing a role I must now play for real as an American citizen.
Posted by hobbitgamer at 1:47 PM